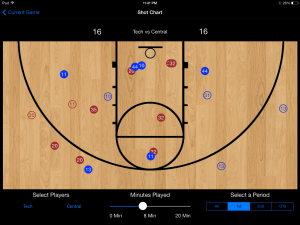 One of my first jobs as an assistant coach was to maintain the shot chart on the sideline. I did mine using paper and pencil on the sideline. My hand writing is less than stellar so sometimes at halftime or after the game, it would be difficult to even read what I had created.Our new shot chart certainly fixes that problem and so much more. Instead of needing yet another statistician or volunteer to put together a shot chart at the game or watching the film of the game one more time to notate each shot attempt and make, StatGeek makes it easy for you to have an extremely useful coaching tool at your fingertips.

The StatGeek shot chart gives you a multitude of options to be able to filter out exactly what you are looking for. First, you have the ability to choose what shot attempts and makes are displayed by selecting just one team or one player or a group of players. Second, you can isolate what appears on the screen by a quarter or half. But the revolutionary and coolest part of the StatGeek shot chart is the time slider in the middle of the bottom bar. Now you can see the sequence of shots taken within the course of a game highlighting a big run that helped you retake the lead or to show what your defense was allowing that allowed your opponents to go ahead. 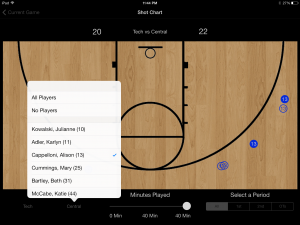 The last feature is what’s truly invaluable because you can show a player how their shot selection moved from right by the basket in the first half to 15 feet out in the second half. This illustrates different things in a new and easy to understand visual way. This is something that could speak to how the other team adjusted their defense or even a conditioning issue for that individual player. It can also help you find moments within the video where certain sequences took place because they can easily be found on our time slider. The possibilities are endless and this simply can’t be created using paper and pencil or by using any other app!

As always, let us know what you think of this feature by emailing us at admin@statgeek.com and let us know how we can make it even better moving forward. Good luck to all our fellow StatGeeks in your holiday tournaments!